Chief Dan Casey welcomed everyone and introduced several new volunteers that had joined in the past six months or so. Casey said, “New Melle is lucky to have a great group of very committed volunteers.” He especially recognized all the volunteers from Lake Sherwood. “That truck rolls a lot” he said, “and those guys do a great job and really help us out.”

Casey thanked former Chief Rick Massey and the Board of Directors for asking him if he’d be interested in replacing Rick when he retired last year, “I’m really excited to be here.” Casey came to New Melle in April 2020 and spent his first few months on the truck filling in for an employee on sick leave. He became Assistant Chief in July and officially assumed the role of Chief in October 2020.

Casey brings a wealth of experience to the district, with a special emphasis on teaching and training. “A lot of folks have come before us, and throughout the years, things have gotten better and safer, but it’s still a dangerous job,” he said. “The biggest thing is we want all our firefighters to come back home after each call. That’s super important to me, and the best way to do that is to be well-trained.”

Casey teaches a Fire-Fighting class all over the country that he developed after a fire where four guys almost didn’t make it out of the building. “I don’t ever want to have that feeling again, and I don’t want anyone else to have that feeling either. I want to bring everyone home. That’s my dedication to you guys and your families.”
One of the first things Casey did was work with the firefighters to establish a mission statement, which is “Community FIRST” Each letter of the word FIRST represents a core value: Family, Integrity, Respect, Service and Tradition. The mission statement helps guide the department in making decisions. Casey said, “It helps answer questions about what we should be doing, ‘Is that part of our mission? Does it help us put Community FIRST?’ And we all buy into it because we developed it together.”
Casey said, “There’s a lot of drive and dedication here. These guys like to do things and learn new stuff, and I want to continue that tradition. I want us to be the best department for this community that we can possibly be.”

A plaque was presented to honor Mark Shell for his six years of service on the Board of Directors.

Finishing off the awards presentation, former Chief Rick Massey received an award for his 41 years of service to the New Melle Fire Department. Board President John “Bucky” Loyd also recognized Rick’s wife, Linda, saying, “Behind every good man is a good woman!” Rick and Linda were both honored with a standing ovation.
Rick said he believes in fate and karma, and he truly believes that all came together with the opportunity for Dan Casey to come to New Melle. He said one of Dan’s biggest assets is Public Relations and that’s a big part of the job. Massey said, “Dan will be a great asset to New Melle as the district addresses the growth and infrastructure needs in the future.”

Voters in the New Melle Fire Protection District passed Proposition FIRE in November 2020, a general obligation bond issue which will provide much-needed facility and equipment upgrades. Plans are underway for a new fire station to be built at the intersection of Hwy. Z and Foristell Road. The department also recently ordered two new brush trucks which will replace two existing trucks that are 20 and 21 years old, respectively. The district has also identified long range goals to expand and staff Station #2 at Hwys. D and DD, and upgrade Station #3 at Lake Sherwood, as well as other needs.

Following the presentation of awards, and a delicious catered dinner from Café Mosaic in Washington, those in attendance enjoyed an evening of Casino games and socializing. For more information about the New Melle Fire Protection District, visit www.newmellefire.org and follow the district on Facebook. The non-emergency number is (636) 828-5528. 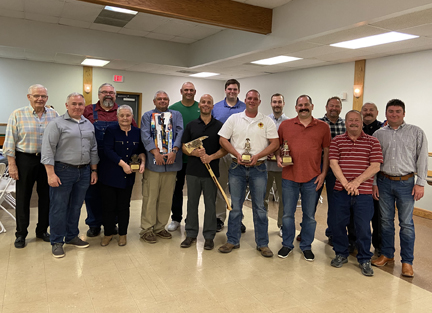 Proposed front rendering for the new firehouse to be built at Hwy. Z and Foristell Road in New Melle.