At New Melle Fire Station One, the first-ever Pinning Ceremony was held on September 7, 2021. The district decided that there were too many deserving firefighters to wait until April when they have their Awards Banquet each year, so they decided to hold a pinning ceremony. Over 20 firefighters received recognition.

Chief Dan Casey gave the State of the District update. The New Melle Fire Protection District’s mission is Community F.I.R.S.T. which stands for Family, Integrity, Respect, Service and Tradition. With all the growth in the area, the fire department has come up with 1, 3, 5, and 10-year plans. Accomplished so far is the $7 million Prop FIRE bond issue that passed last fall for building the future firehouse at Foristell Road and Highway Z, and upgrading the other firehouses.

Also, the State of Missouri issued the department their EMRA (Emergency Medicine Residents’ Association) license. (Click here to learn more about the EMRA license.)The department has also purchased new uniforms, two new brush trucks that will arrive next year, and other minor changes to the organization that will allow them to grow.

Most importantly, the highest priority is on training. Chief Dan Casey said, “Education and training are an everyday must for firefighters. We have no room for incompetence in our line of work. Training is overwhelmingly my highest priority.” He talked about the importance of having the correct equipment and knowledge when responding to calls. Since family is part of their mission Chief Casey said, “We must have all the firefighters return home to their families after each alarm. Firefighters are courageous, willing to do anything at any given moment.” The Chief told the crowd, “Look around the room because the room is filled with those courageous firefighters.”

Current firefighters who had not yet received a badge were Andrew Lapin, Christopher Hendrix, Scott King, Brain Smith and Christopher Bledsoe.
Candidate Firefighters - (Probationary) receiving badges were Jacob Casey, Neil Deyong, John Gleich, Daniel Main, Rodney Owen, Daniel Ploesser and Brennen Roberts. Due to training obligations, Timothy Dial, Dillon Monroe, Gabriel Monroe and Kyle Williams could not participate in the ceremony. Gabriel Schnieder (third-generation firefighter) was unable to be there; he has returned to college. Both groups were sworn in, and each firefighter was presented with their badge and pinned by someone of their choosing—usually spouses, children, parents, other department members, etc.

John Schneider was promoted to Lieutenant at the Lake Sherwood Volunteer Station #3. Chief Casey complemented that firehouse for how quickly they respond, considering it is all-volunteer. John was presented with a new badge and fire helmet shield.

Kevin Martin was promoted to Division Chief for the Volunteer Staff. Chief Casey wants to make sure that everyone in his department is taken care of, and he knows that he cannot do that alone. So the board of directors decided that promoting Kevin to Volunteer Division Chief would better serve the department. Kevin was presented with a new badge and fire helmet shield.

The last recognition of the evening went to Pastor Maxx Fisher, who was made the official NMFPD Chaplain. Maxx was presented with a fire helmet shield. Maxx volunteered his services and wanted to help, and they took him up on it. Maxx said, “I see you drive past all the time and am just floored by what you do.” He commented on the sacrifices the firemen make for the entire community, and told the department, “Whatever I can do to serve you guys, whatever our congregation can do to serve you, just let us know.” Pastor Fisher closed the ceremony with a prayer for the firefighters.

Chief Casey thanked the auxiliary members for all of their endeavors on behalf of the NMFPD and all of the families of the dedicated firefighters for their sacrifice and support.

*Unable to attend due to prior obligations. 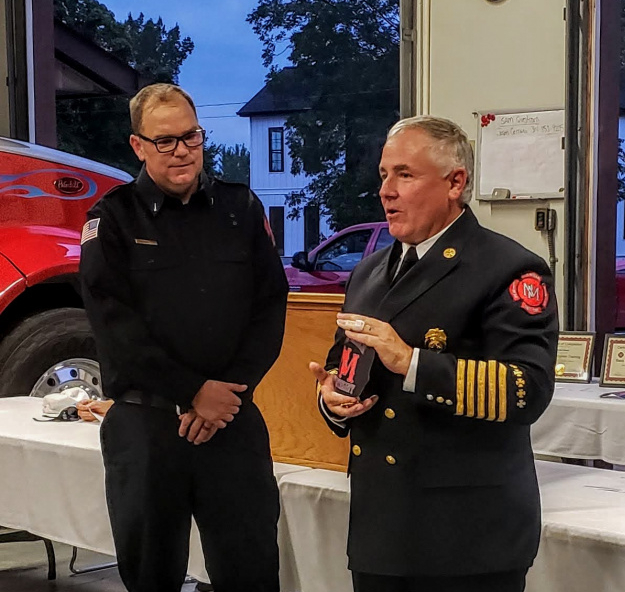 Chief Casey presenting John Schneider with
his new fire helmet shield for his promotion to Lieutenant. 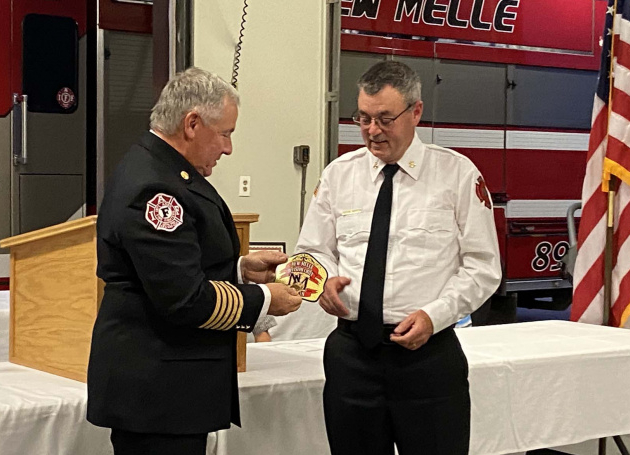 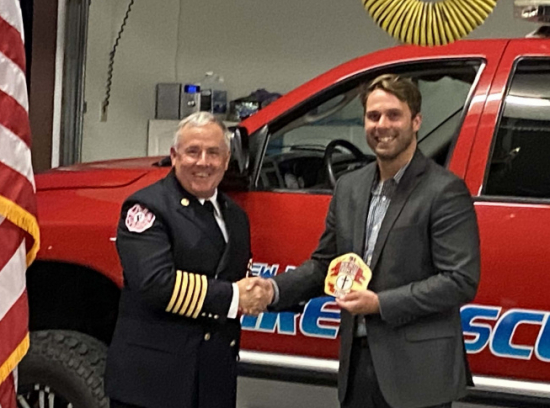